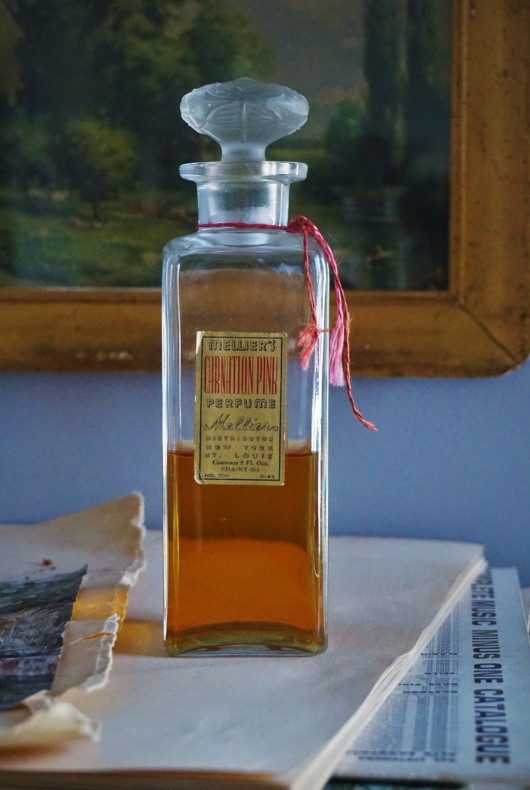 This supremely carnation, floral fragrance is musky, balsamic and reminds me a lot of Coty L’Origan and a wee bit of L’Heure Bleue (L’Heure Bleue especially in the drydown).  It’s a very early 1900’s scent (based on my research and nose) with likely notes of bergamot, rose, ylang ylang, violet, iris, carnation, nutmeg, coriander, cloves, pepper, benzoin, musk, vanilla, incense and sandalwood.

In the drydown it shimmies into a powdery, feminine, spicy fragrance still dominated by carnation.  And, as someone who has had a somewhat bad impression of carnation based on 1980’s perfumes (no offense to those who enjoy them) I am again delighted by a very vintage carnation gem.  I love L’Heure Bleue too.

Carnation Pink Perfume is dreamy.  Images of ladies in long, flowing dresses and gentlemen with walking sticks out for a warm summer evening stroll come to mind.  It is innocent but not unknowing, and cheerful but staid.  Ragtime tunes and ice cream parlors with giant vintage lollipops should accompany this scent.  Carnation Pink is the epitome of old-fashioned winsome charm. 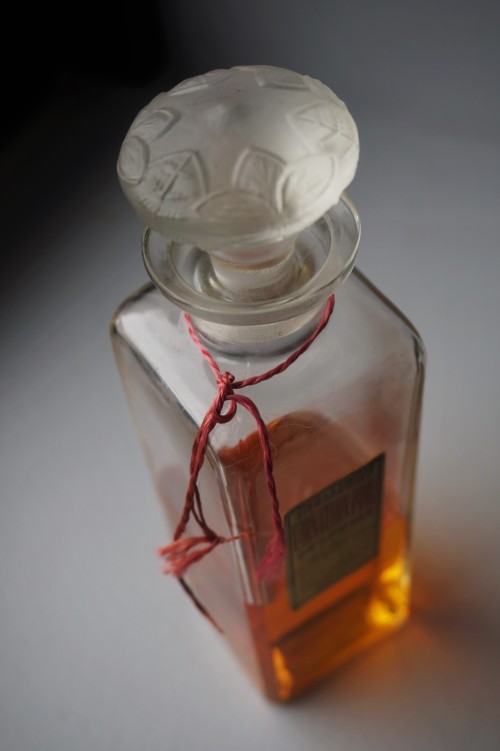 The manufacturer of Mellier’s, Carnation Pink Perfume among other scents (over 60 other varieties), Mellier Drug Co. was incorporated at some point during the 1870’s or 80’s (dates vary) and based out of St. Louis, Missouri.   Kennedy Duncan Mellier, who founded Mellier Drug Co. with his brother, Albin Mellier (Albin was the President), was a graduate of Princeton, an Episcopalian and a member of the Missouri Historical Society whose favorite recreation was supposedly golf.   K. Duncan Mellier (as it appears he was known) lived, for a time, at 3801 West Pine Boulevard in St. Louis, Missouri which is now a part of the campus of St Louis University.  One abadoned, boarded up mansion remains from Mr. Mellier’s old neighborhood, and that’s how most of Mellier Drug Co. is to be found as well – completely lost to history. 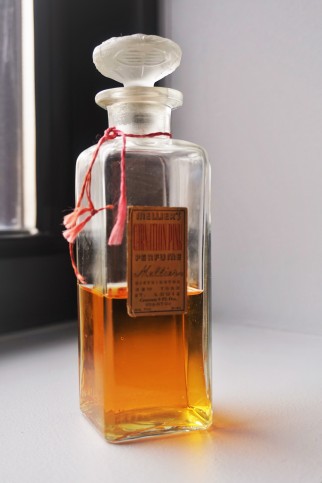 Matter of fact, I wouldn’t be a bit surprised if Carnation Pink is almost one of a kind.  I can’t even find a specific date for this particular Mellier perfume.  And, as a person who appreciates history and perfume I feel both lucky and somewhat unnerved by that possiblity.  It might not be a world renowned perfume by any stretch of the imagination (it’s “just” an old drugstore brand perfume), but it is very lovely and I’m sure that in the past there were memories attached to this scent.  I’ll have to take good care of it.

So, on that note, have a happy Easter and a pleasant rest of your weekend or a nice start to your week. 🙂